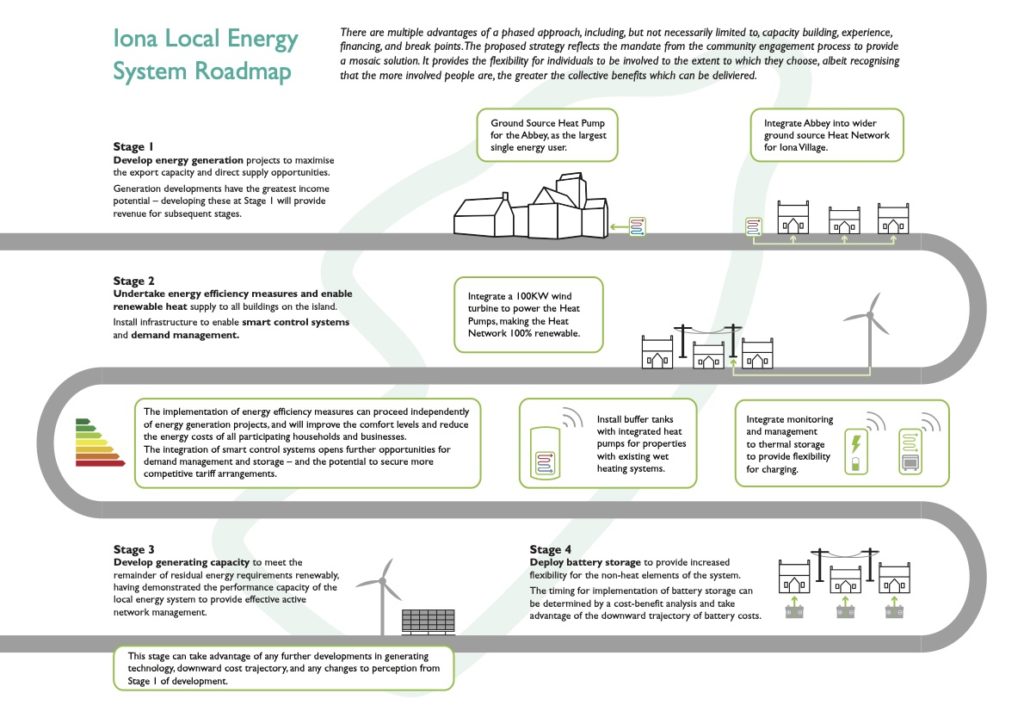 Iona Renewables has developed a local energy Roadmap that lays out a vision for how a community-led scheme can work towards owning, generating, storing and using energy on the island. There are five high impact first phase projects:

The studies to shape Iona’s energy transition have been broad in scope and all viable renewable energy generation technologies have been assessed, along with energy storage and demand management options. The energy Roadmap takes an evidence-based approach in identifying and phasing development, with a focus on deliverable and scalable projects.

Iona Renewables is being supported through this initial phase of it’s growth by the Scottish Government’s Strengthening Communities Programme and Investing in Communities Fund.

In 2016, Iona Renewables identified potential to decarbonise the heat supply on the island of Iona and began to take forward feasibility work for a ground source Heat Network. In the period covered by this report Iona Renewables significantly developed the Network, including establishing and handing over responsibility to its wholly owned trading subsidiary, Iona Energy Ltd. Within less than two years — as of 31 March 2018 — £1.65 million capital funding has been secured for Iona Energy Limited to install, own and operate the Network. A further ~£150K is being raised through interest free loans for businesses and direct investment by the Council, bringing total project capital funding to ~£1.795 million. The Heat Network is being developed as a community owned asset, with surpluses in due course to be gifted by Iona Energy Ltd. to Iona Renewables in support of its charitable objectives.

The Heat Network started as two first-phase high-impact projects to supply renewable heat to a) Iona Abbey and b) Iona Village, which are now being progressed as a single project. Overall, the Heat Network will:

The feasibility work identified a Heat Network powered by a community owned wind turbine as an efficient and cost-effective option, and one that could in due course enable the Heat Network to be 100% renewable and a leading example of a Local Energy System. Wind energy and heat pumps operate very effectively together. Heat Pumps can use the electrical energy generated by wind to provide the input energy required for heating and hot water. There also tends to be a close correlation between energy generation from wind and demand from heat pumps — buildings tend to need more heat when it is windy (particularly with older, leakier building stock).

Iona Renewables completed a CARES Start Up Grant project to examine potential options for supplying electricity from a turbine directly to the demand requirement on Iona, particularly to meet the concentrated demand of the Heat Network. This direct supply was in place of fully exporting to the grid which would require IR to fund a grid upgrade costing around £1M.

Environmental (including ornithological) surveys were also carried out to assess potential impacts of wind energy, led by the National Trust for Scotland (NTS) Ranger supported by island volunteers. We are very grateful to NTS and the volunteers for all their work, in all weather conditions!

The study demonstrated that the most promising direct supply option would be to pursue a Virtual Private Network (VPN). Incoming proposed changes (April 2018) to the Balancing and Settlement Code would allow multiple connections ‘behind the meter’, allowing customers to get power from a community owned turbine when the energy is available, but also from their regular electricity provider to ensure continuous supply. With a VPN, local tariffs can be created that will bring significant savings to the local community as well as increased profits for the generating assets. The upfront costs to the community would be far less than a Private Wire Network as the system relies most heavily on automation and communications software and hardware that negates the need for significant physical infrastructure. There would also be far less operational burden. Overall, a VPN could be well suited to Iona.

This project has been put on the back burner while we focus on implementing the Heat Network.

Development of options has been supported by CARES.

Iona Renewables implemented a one-year Climate Challenge Fund (CCF) project, ‘Lightening the Load’. The project aimed to increase carbon-awareness and energy efficiency on the island, and was delivered by Iona Renewables in partnership with Edinburgh-based community renewables experts, Scene Connect.

Carbon literacy through workshops and direct engagement, to increase awareness of climate change and promote positive behaviour change;Lightening the Load has focused on several complementary low carbon initiatives, including:

Progress on energy efficiency was particularly challenging. However, the project helped to expose clear deficiencies within home energy efficiency assessment, funding and referral processes, whilst informing a new model for energy efficiency deployment which pays closer attention to local context. The fact of having CCF support also greatly encouraged the main agencies to listen seriously to the problems identified through the project and to try to make system-wide improvements 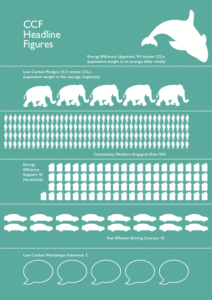